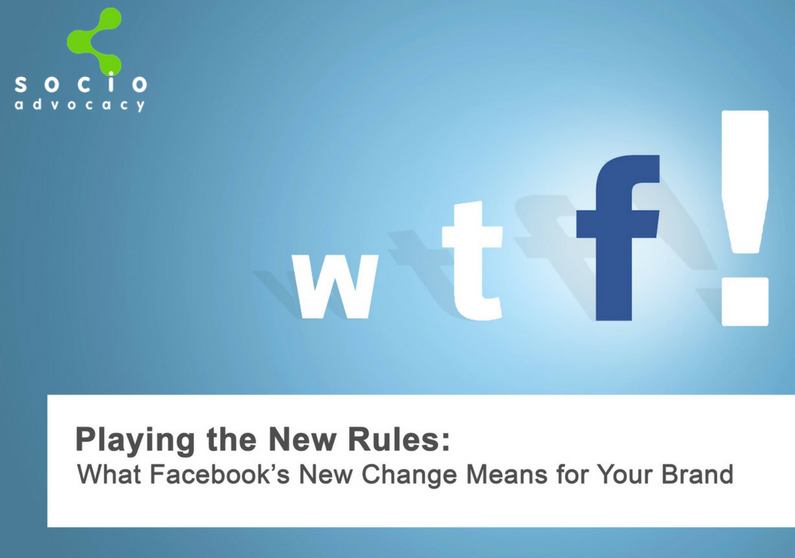 Facebook’s announced, in an epicly bold move, that they would now lean towards showing more “meaningful social interactions” over “relevant content”.

What does that mean?

It means less public content from businesses or publishers.

Their shares saw a 4% drop as a result of it, but they’ve stuck to their guns and decided it was time.

Responding to some severely negative backlash about being responsible for Russians influencing the 2016 U.S. Presidential elections, not to mention claims that time spent on the social site could affect users mental health, CEO, Mark Zuckerberg, admitted that the new Facebook algorithm change would probably lower the time users spend on the platform, but he was okay with that too.

While we’ll leave it for those on Wall Street to determine whether the news is worthy of a “strong buy” or “hold”, what we really want to know is:

What does this mean for your Brand?

Well, for starters it means that your audience engagement will probably see a dip.

Ever since it’s inception, Social Media has been a place to stay connected. With friends and family, yes. But it has also been instrumental in helping businesses stay in touch with their audiences.

Every Brand Manager knows that it’s not always possible to engage an audience offline.

But that never mattered.

Now, we’re all for the decision, because we agree with Zuckerberg when he says that this will also mean that there’ll be more value to the time spent on the platform.

Not to take away from the benevolence of it all, but there has got to be something that can still get Brands a piece of the cake.

Yes, you’re going to see your wife’s pot roast pictures higher up in the newsfeed than that Buzzfeed Tasty video. But what if your wife were to share that Tasty video?

In essence, that would pop it right up there with news from your other friends and family.

This very thought is probably why interest in Employee Advocacy grew a whopping 587% in 2017, according to an IDC report.

By empowering your employees to share your Brand message on their personal profiles, you’re effectively making them micro influencers and Brand ambassadors in their own right.

Not only does this give you an edge, but it’s also a lot lighter on your pocket as compared to paid advertising on Facebook. I mean, who wouldn’t want to plug a $130K leak in their budget, right?

We realize the logic that governs the concept of employee advocacy is a no-brainer.

So the only question that remains now is: When?

You’d be surprised at the ease of it all. All you need to do is schedule a demo!