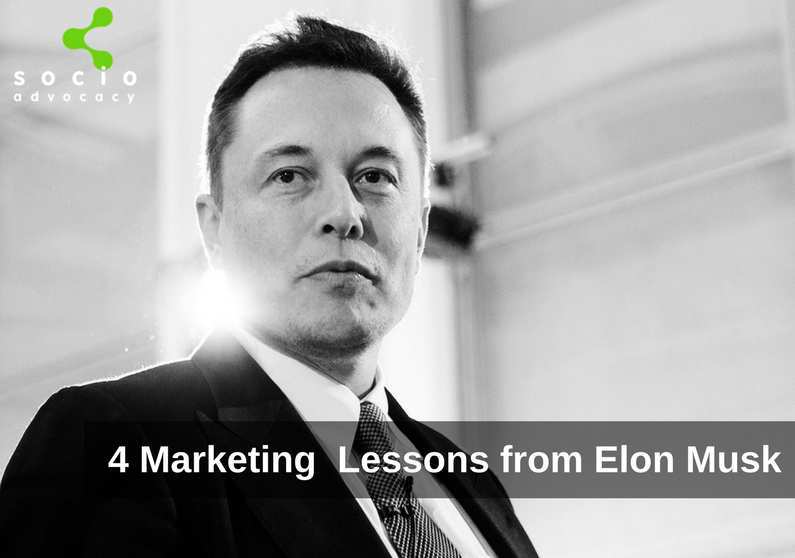 Few will dispute the fact that Elon Musk is a true genius of our time. As one of two people to have set up three multi-billion dollar companies, he’s covered the Financial, Automotive, Artificial Intelligence, Renewable Energy, Technology, and Space industries, racking up billions of dollars in the process.

Even with an affinity to take up projects that most businessmen wouldn’t touch with a ten-foot pole, Musk has his marketing game spot on. And of course Tesla, Solar City, PayPal, and SpaceX to there to show for it.

With several notable achievements under his belt, we narrowed it down to 4 major marketing lessons we learned from Mr. Musk.

Don’t Be Afraid to Challenge the Status Quo

Musk challenges the status quo with almost everything he touches. In a time when people feared the internet for financial transactions, Musk was busy setting up Paypal and changing the internet forever. Paypal has now gone on to become almost synonymous with safe, no-nonsense, online payments.

Taking a page out of his book, marketers can learn to take chances. By just following what others are doing isn’t going to cut it. By taking chances on newer techniques, you stand a chance to garner a first mover advantage. Take employee advocacy for that matter, its new yes, but the companies that have given it a go have seen some pretty amazing results.

Seek Feedback and Implement It

This is perhaps the best marketing lesson you can pick from Elon Musk.

Last year, he sent out a series of tweets asking users what Tesla could do to better their lives. One of the responses claimed that people usually left their cars on supercharge stations even after they were charged to capacity.

Musk’s response was almost as immediate as his response. He tweeted back acknowledging the complaint and the very next day Tesla introduced a fleet-wide idle time fee for those who parked at charge stations.

It’s as simple as – ask for feedback from your audience and take steps to addressing it. An actual response. Not a sugar coated PR response.

The best thing about this superhuman is that he’s not just about the work. From tweeting about his artistic talent, to when he made Snoop Dug a thing, and quite literally being the dad of all dad jokes, Musk just knows how to keep his audience entertained and engaged.

Adding that personal touch to your brand’s social media marketing strategy not only makes it more relatable, it also adds a personal and human touch that encourages your audience to see you as more than just another brand promoting its wears.

Build suspense over a new launch

Elon Musk isn’t one to shy away from theatrics. With an ingenious use of Twitter, he drops teasers for new product updates. The suspense around the news itself is sufficient to get people coming back for more.

This is exactly what you might be missing out on. Give your audience a glimpse into the future of your brand. By sharing this “inside information” it will not only give people a reason to follow you, it will also keep them coming back to you to check if they have missed out on anything.